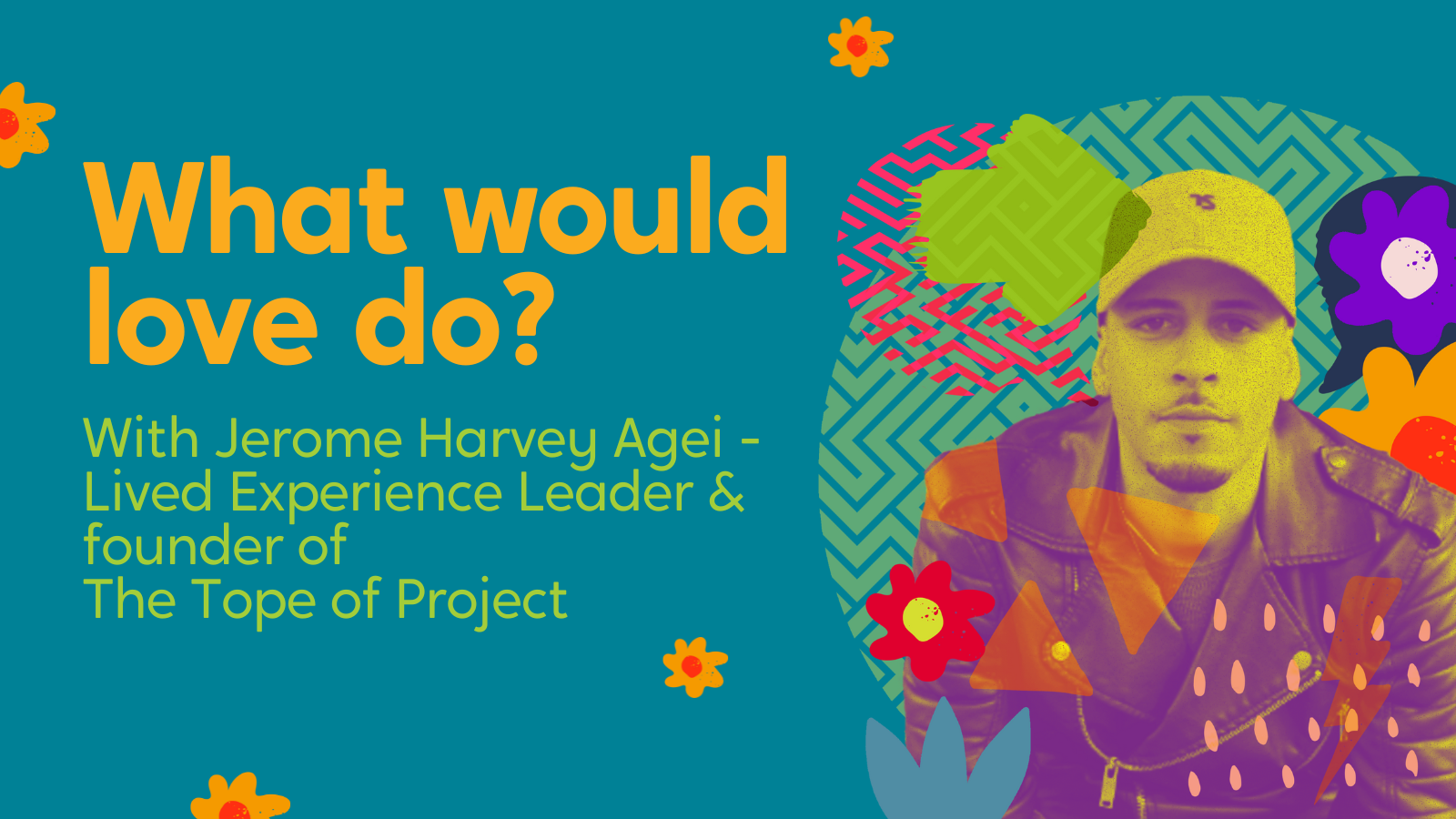 Originally from East London, Jerome Harvey-Agyei is a lived experience leader and co-founder of The Topé Project, a volunteer-run organisation supporting care leavers “who may not see beyond their circumstances to understand their life potential”. For the latest episode of our ‘In Conversation With’ series, we chatted to Jerome to learn more about his story.

Jerome introduces himself as a person of love, humility, passion and balance. “I embrace the darkness like Batman,” he laughs, “but I also embrace the light.” Despite, like many children and young people in care, experiencing trauma growing up, Jerome also describes this as “really beautiful” time for him. Being part of both worlds going through the care system is a big part of what he says has enabled him to understand his journey and to pass on what he has learned.

The Topé Project was formed after Jerome’s close friend Topé, also a care leaver, sadly took his own life. The project has the motto “turning pain into positivity”, and aims to help reduce the feelings of loneliness among young care leavers. They created the UK’s first large-scale Christmas Day event in 2012 to support vulnerable care leavers who are alone, which has continued to run every year since.

The success of the event led Jerome and his team to look into more ways in which they could add value – not only to care leavers – but to the system as a whole, including how social workers could be better supported, and ways in which to better influence policy makers.

Together with The Topé Project’s co-founder, Shalyce, Jerome has created various tools and games that can be implemented into strategies, drawing on their personal experiences of growing up in care.

“What I realised reflecting on the care system – unconsciously, through the workers I observed – was that I was given permission to access trauma quicker than I was to access love,” says Jerome. “And that was because everything is reinforced by unconscious language. The meaning I would generally link to my experiences growing up was around shame, guilt, anger, frustration, all feelings that didn’t necessarily serve me all the time. It was that ‘what am I going to do next?’ which was not as easily available to me.”

Jerome says that a particularly positive message he took from growing up was that “not everything is about me, it’s about we.”

“We experienced the value of participation,” says Jerome. “I felt like I had a voice and I was exposed to different experiences. We had a service that was amazing and broke all sorts of barriers, and that gave me new meaning and a new understanding, while also enabling me to understand solutions.”

A large part of Jerome’s role is “facilitating”. In other words, giving children and young people a lens to look at their experiences differently and giving them ownership over their lives so they can ultimately be responsible for them. “It’s not to say that things don’t go wrong,” says Jerome. “But in terms of the darkness, feeling it, but not staying in it”.

To help people in professional roles better communicate with young people in care and feel that there is value and worth in their work, Jerome and his team run a training session called “What Would Love Do?”, which reminds participants of the simplicity of giving space to care.

He gives an example of social workers keeping in mind questions like ‘who am I writing this document for?’, ‘what is this young person going to read 18 years down the line?’ ‘am I long-term thinking, or short-term thinking?’.

“But first we start with you,” says Jerome. He explains that someone considering a career in social work who has unprocessed trauma themselves may not yet be in the best position to help. “If you’re not okay and you’ve got to deal with a load of different trauma, it’s probably not going to be manageable,” he says.

The Topé Project’s approach to training doesn’t tell participants what they need to do, instead providing them with the tools they need to gain good self-awareness and respond to a child’s specific needs, rather than making assumptions.

Jerome ran another training session “In Power” with a group of young people in Hertfordshire. He recalls one particular young person who talked about her experiences of trauma.

“She went from not really wanting to be there on the first day to standing up in front of everyone and speaking with passion,” says Jerome. “It was something that not only helped her but the whole room.”

“What was especially interesting was that she physically had a change. Something happened because she let go of that burden and she took her power back. She asked me what I did and I told her ‘I just gave you the right questions to ask yourself’ and then we held the space. That has been one of my most beautiful moments helping young people.”

Jerome has also worked with a team in Moldova to help them to set up the first care leaver service in the country, as well as running online sessions with the Centre for Public Impact. “We ask questions that will help them to move from pain to ‘how do we make workers feel valued?’ and ultimately enabling beautiful conversations, deeper connections, and a better working environment.”

In addition, Jerome has begun working closely with Lumos, an international charity that promotes an end to the institutionalisation of children worldwide.

“A lot of that international work came through them as well around supporting kids in care from other countries – in Kenya, Haiti, Bulgaria, the Czech Republic, Moldova, Australia, New York.” Jerome and the team advise their advocates on how to engage meaningfully with young people and get them involved in the design, development, and delivery of services.

He says that if he could give one message to young care-experienced people it would be “you are important”. “I’d always say to people if you’re struggling to fit into this world, go in within your own world. Once you start to understand who you are, the world will become easier because you don’t need to prove yourself to anyone. You understand that your darkness serves a purpose and your light serves of purpose, and you don’t need to be ashamed of them.”

Jerome has plans to open an empowerment centre to help bring together the skills and knowledge he’s gained from people on his journey. He hopes to build an environment that creatively empowers young people to pursue their own paths and helps to support amazing communities that nourish future generations to come.

In addition to co-founding The Topé Project, Jerome works as a youth participation lead at The Mayor Of London’s Violence Reduction Unit (VRU). He also works as a radio host and is a One Young World Ambassador. You can learn more about him by visiting The Tope Project website or by watching his videos on YouTube. You can also contact him via email, or reach out to him on LinkedIn, Instagram, or Twitter.