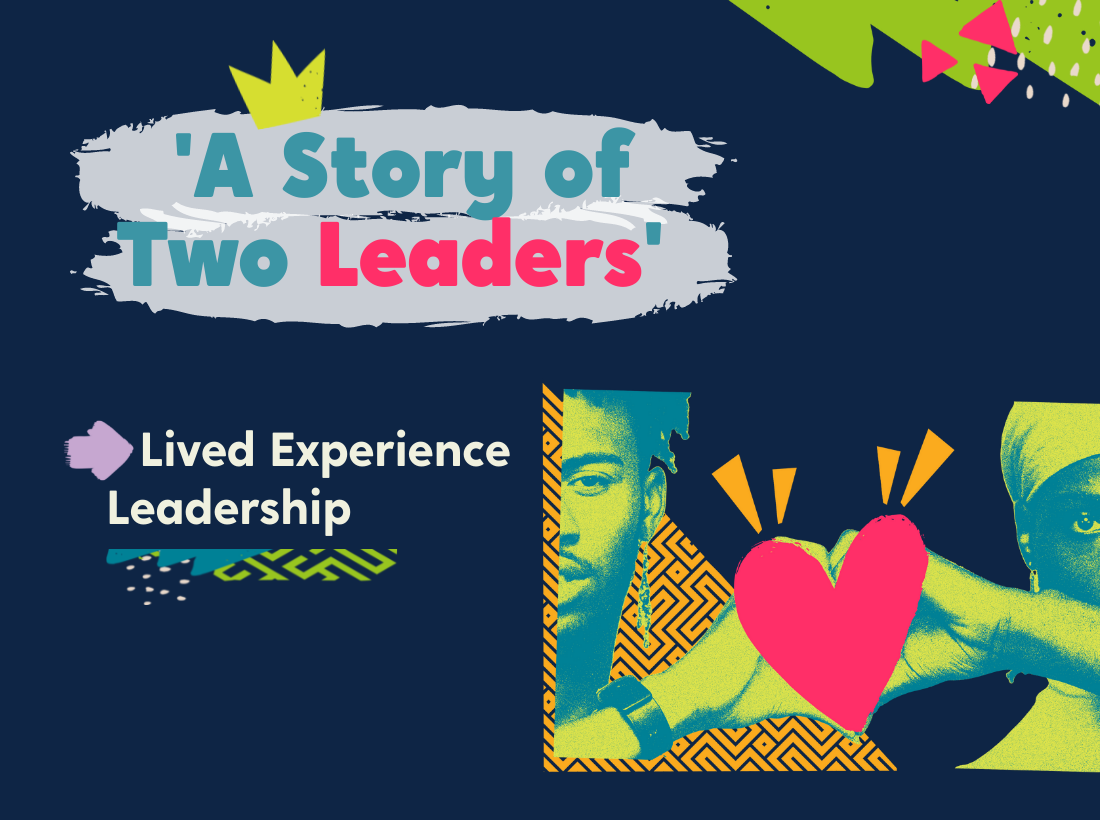 The National Lottery defined a Lived Experience Leader as ‘someone who uses their first-hand experience of a social issue to create positive change for, and with, communities and people they share those experiences with’.

I like this definition a lot; it tells me that we value someone who has been through something in their life and decided that they would like to do something to help those who have been through the same. What I like about this is how inclusive it is: everyone goes through things and therefore, by this definition, we can all be leaders in doing something about the things we may have experienced.

When I was younger, I had a very wealthy friend who had every material thing he needed: the newest iPad, the flashy car, he always dressed well and always had money. I on the other hand was in foster care. I had to argue with a social worker to get a new pair of shoes, and learnt how to multiply my pocket money by buying 10 cigarettes for £1.99 and selling them for 50p each at school.

My friend and I were inseparable. We would spend nights in his fancy house drinking his dad’s alcohol because he was never home. His dad was working his ‘international’ job, which sounded really important. We connected because of this; even though our lives couldn’t have been any further apart economically, we both knew what it felt like to have absent fathers.

I think my friend had it harder than me in some ways: his dad was absent but he still had the burden of the pressure to become the leader his dad expected him to be. His dad was a strong, unsympathetic person, with a ‘just do it’ attitude that left emotion at home and brought focus to work. My dad couldn’t have cared about what I became. The expectations from social care were to have a reduced school timetable, feel lucky if you got a permanent foster placement and prepare for early independence.

I would look at my friend with jealousy, because I wanted to be the person his dad wanted him to be, but I believed that this would never be available to me. I longed to be a lawyer or doctor, someone with significance or importance, because I really wanted to make a difference. My friend would often tell me that he was jealous of me because people liked me, I was passionate, confident and brave enough to do things. These things felt unavailable to my friend because he had to conform to the ideas his dad had about what he should be. This required a strict routine and relentless focus and if my friend ever thought about doing anything outside of this, the anxiety that overcame him prevented him from taking action.

My upbringing couldn’t have been different. I bounced between foster homes and changed social workers so many times that the expectations of people became irrelevant. There was something about not having a family system and the overbearing need to do well in the eyes of a parent that felt liberating. I lived in a bureaucratic system, that was so unloving in its structure and approach that even the people who worked for it felt the impact of its affliction. The system was broken, and I thought people loved me with desperation because this was the only thing they had to give. From this I felt I needed to ‘succeed’ in some way, not because I had pressure from these people, but because I wanted to let them know that the love they gave was not in vain.

My friend and I both became leaders, but we could not have been any more different. He is a leader who has to work through authority, order and process and I am a leader who needs to use empathy, agility and flexibility. He has a job where making money is the most important thing; I have a job that requires me to make an impact. We both feel stress; we both moan about our work and we both feel frustrated by our colleagues. When we talk, we fall straight back into the old patterns of our childhood. I listen to his views and emotions and try to help him to regulate. He offers me brutal guidance how ‘corporates’ cut down the most frustrating people, which is entertaining to marvel at, but couldn’t be any further away from how I would act.

Society may look at my friend as a success and me as a survivor. I feel empathy for my friend because he carried such a harsh burden to succeed, which gave him no ability to go outside the pressure of this expectation. He was unable to live outside the expectations that had been laid out for him, unable to make mistakes or be curious. He carried an awful inferiority complex, created by an unforgiving father, who was driven to see his child in leadership. My friend was anxious, overwhelmed and forced himself to believe that vulnerability is weakness and one must never cry, no matter how hard it gets.