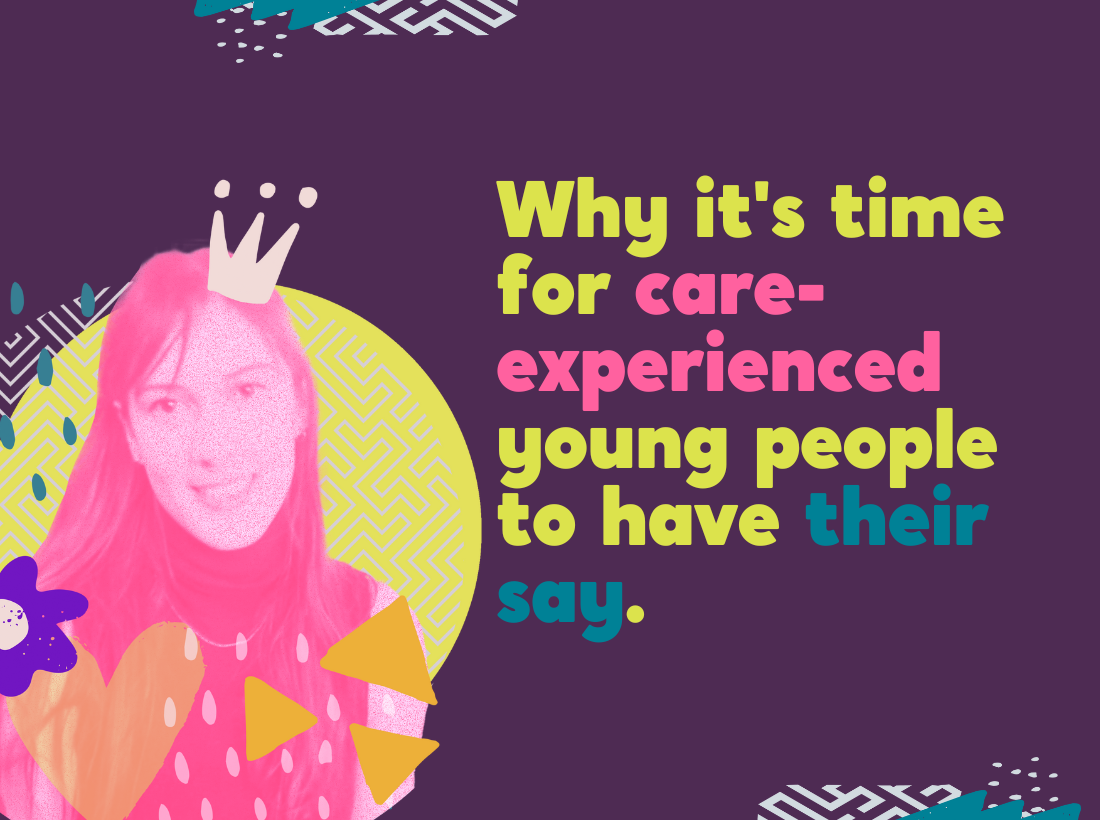 Rebekah Pierre is a care-experienced social worker, campaigner and writer, who has written about the care system for publications such as The Guardian, The Independent, and more. She is currently editing ‘Free Loaves on Fridays’, an anthology which will invite care-experienced people to share their stories with the world. She is one of 14 young people on The Care Leaders Fellowship.

Rebekah had two social workers as a young person – one of whom didn’t treat her with the respect she deserved. After receiving her care files and seeing that this social worker was responsible for much of what was written, Rebekah wrote an open letter to her.

“I also had one positive experience with a social worker who actually did take the time to listen and encouraged me to go to university,” says Rebekah. “I saw social work at its worst and at its best so I wanted to go and be like the positive social worker that I’d had for other young people.”

In her work, Rebekah hopes to change the narrative about who care-experienced people are. “When you hear the term ‘care-experienced’, there are negative stereotypes that come to mind for lots of people. Their idea of care might come from Tracy Beaker which is really damaging.

“I want to raise awareness about what being care-experienced is in reality and talk about the fact that it’s diverse and has many forms. I also want to create a platform that allows us as care leavers to speak for ourselves. It’s always damning headlines, damning reports, patronising cartoons, but we never really have a chance to say who we are and to claim being care-experienced as a positive identity.”

Having worked in children’s social care for several years now, first as a Frontline social worker before moving into policy and campaigns, Rebekah reiterates that each child has individual needs that should be catered for. “There’s no one size fits all solution.

“Being trauma-informed and compassionate must be at the heart of absolutely everything that we do. I think that each child has so much untapped potential and with the right support, everyone can thrive.

When it comes to talking about potential improvements in the care system, Rebekah stresses the importance of treating it in the same way that all other public services are treated. “Cuts to social services are usually the first to happen, it seems.

“I also think there needs to be a focus on humanity. The reason I say that is because at the moment, we’re marching towards privatisation and a system that could be selling off parts of children’s services to people who will make profit.

“We need to move away from profit and towards people.”

Despite being, in her words, from a “deprived small town where education wasn’t valued at all,” Rebekah always had a dream to learn another language as an adult. One day, she decided to move to Chile and spend a year travelling in Spanish-speaking countries.

“It was the roughest, most difficult, but rewarding thing I’ve ever done and I’m really proud of myself.

“I had to put myself in extremely vulnerable positions and start something completely from scratch. Now, all these years later, I can just be walking down the road in London and accidentally overhear a Spanish conversation and I can’t believe that.

“I feel like it was a real gift myself.”

Besides putting yourself out there and trying new things, Rebekah’s best advice for care leavers is to “get to know what your rights are and believe that you deserve them”.

“I felt so disempowered and grateful for any scrap of hope I got that I never had the chance to seek out what my rights were. But there’s so much more support available than you realise now. Go to your local authority or university and find it.

“It’s a shame because it shouldn’t have to be your responsibility but so much of this stuff goes under the radar.”

Rebekah’s other piece of advice is to not let your past define you. “That might sound really cliche but often the adverse experiences that you’ve had will give you insight into life that you can never receive from a qualification or a course.

“Believe in what you have to offer because it’s more unique than you think.”

When she left the system, Rebekah recalls feeling isolated and unsupported. “It was like ‘bye, see you later’ and I never heard from anybody again.

“I think young people need to be empowered from day one by being told about the support they can receive and the fact that they can access their care files.”

Rebekah also believes that care-experienced people need to be engaged in more meaningful ways. “Don’t just expect them to come into a clinical, white-walled room and be able to immediately engage with you.

“If this is a system promoting equality, care leavers need to be met on their own terms, too. Don’t just think of care-experienced people as being tokenistic, bringing them in to sit on the odd panel or participate in the odd event. Instead, see them as partners in everything that you do.”

With statistics showing that care leavers or care-experienced students are at a greater risk of dropping out of higher education, we ask Rebekah what her experience with traditional education was like.

“I studied my A-Levels in a horrible hostel I was living in at the time where I didn’t have electricity half the time and there was noise all hours of the night. I did my A-Level English exam with a candle in one hand and a pen in the other.”

Rebekah says this impacted both her attendance and her mental health. “I think it’s a miracle that I managed to get any A-Levels at all.

“Then, when I went to university, I remember my housemates had family members filling their fridges, supporting them, and I was there on my own. It was quite an isolating and difficult experience but it was also a golden ticket out of a life that I wanted to escape from.

“I think other people take education for granted or are maybe pushed there by their parents and they rebel by slacking off uni but I was rebelling by being there in the first place. It wasn’t what was expected of me.”

“Support is definitely needed over the holidays, too. Many of us have to sofa surf or get live-in residential jobs. I also think just having a consistent person that we can turn to as well, even if it’s just someone to chat with when things aren’t going so well, or who can be an advocate for you.

“I had a lot of privileged friends who knew instinctively how to act at a dinner, or how to organise themselves in lectures – but I didn’t have any of that.

“I’d gone from survival mode to an environment where you’re supposed to thrive.”

Rebekah feels strongly that this support should extend beyond education, too.

“As well as paying for pots and pans and other basics, I think it’s important to give them a budget to go to the theatre or to go out to dinner or to pursue learning an instrument or a hobby, too. These are all things that most people would have as standard.”

If you’re a care leader wondering what support you are entitled to, Rebekah recommends looking at The Care Leaver Offer website.

She also recommends finding a community. “I didn’t start talking about my experiences until my late 20s but now I look at this new generation of care-experienced people and they’re all friends on Twitter or part of a forum and that’s amazing.

“My final piece of advice would be to get used to having a voice. This is a hard thing to do when you’ve been disempowered for so long but it’s so valuable to document your experiences – both positive and negative – and to find people who will champion and support you.

Rebekah’s anthology, Free Loaves on Fridays is currently being crowdfunded with proceeds going to Together Trustand Article 39.

“The heart of this anthology is to give care-experienced people of all backgrounds the chance to write and share their story. It’s being published with Unbound, a publisher that promotes underrepresented voices.”

The inspiration behind the title for the book was Rebekah’s time living in a hostel as a teenager in the care system. “I lived in poverty a lot of the time, and every Friday, we’d get a sliced white loaf – the most horrible bog-standard loaf you could imagine.

“Whilst I was kind of grateful for that, it just felt like we were never given a choice. We could never choose what bread we wanted, we’d just get whatever was left. This book is about giving care-experienced people a choice.

“We’ve had a major review into the care system and there are lots of other people writing about us, without us.

Calls for submissions for Free Loaves on Friday will open in mid November.

You can find out more about the book or order a copy here. You can also follow Rebekah on LinkedIn and Twitter.